Lasik (laser in situ keratomileusis) refers to the procedure where an eye doctor or ophthalmologist uses a laser to reshape the cornea. If you suffer from myopia(nearsightedness), hyperopia(farsightedness) or astigmatism (a “rugby ball” shaped cornea resulting in blurry vision) and prefer not to wear glasses or contact lenses, one should consider Lasik eye surgery.  It’s simple and effective. It’s been done globally since 1990.  About 20 million procedures have been performed worldwide.

How do I know if I am a candidate?

Lasik surgery is an option if you:

We offer a free assessment to see if you are a suitable candidate or not.

What are the advantages of Lasik?

What is involved in the surgery?

FIRST STEP.  The cutting of a thin flap of tissue to prepare the laser site.  A suction ring is applied to the white of the eye.  This stabilizes the eye.  A keratome, which is a sophisticated machine, then makes a very thin flap across the surface of the cornea.  This takes approximately 20 seconds to do.

SECOND STEP.  The excimer laser is then applied under computer control to the corneal bed to vaporize a pre-determined amount of tissue, which re-shapes the surface of the eye.  This takes approximately 10-30 seconds.  The thin flap of cornea is then replaced and heals down.

What are the possible complications?

Few people enjoy wearing spectacles and many consider being short-sighted a problem. To be able to surgically correct this problem is a blessing for most people. Despite this modern advance, one must weigh the relative risks versus the benefits that can be obtained by correcting the problem. This assessment must be made by each individual on its’ merits for that patient. It is worth remembering the following facts:-

PRK(Photorefractive Keratectomy) is a laser technique used for thinner corneas. No flap is cut. The laser beam is applied directly onto the cornea. No pain is experienced during the procedure since the cornea is anaethetised. A bandage contact lens is used for a few days after the procedure for pain relief while the tissues underneath heal. Unlike Lasik, PRK results in some pain and discomfort lasting a few days after the surgery. The vision also takes a few days longer to return and for higher prescriptions, the surgeon may opt to do surgery on one eye at a time, approximately a month apart. 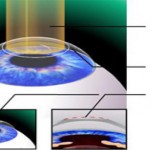 I started wearing spectacles for short sightedness from the age of 12. This influenced my choice of career. Ten years ago my prescription stabilized to about -4.00 in both eyes but I was still not confident to have Lasik done. As optometrists, we don’t see all the successful Lasik patients since they don’t come back for spectacles. We only see those patients that have regressed or still need mild correction post Lasik, hence the negative impression optometrists get of the procedure.

After working with pre and post Lasik patients and seeing the success rate, I realized that for ten years I had been telling all my patients that there was not enough evidence to prove the safety or success of Lasik but it was being practiced for more than ten years already. More than 90% of the patients lasered were thrilled with the outcome. I had spent 20 years wearing glasses, as due to allergies I could not wear contact lenses on a daily basis.

I was fully confident that I was in good hands and that Dr Nortje would not do anything to compromise my vision. On the morning of surgery I was not at all anxious. I had watched him operate on numerous people. The procedure was not as intimidating as the information I had read, had made it out to be. I did have slight hemorrhages on the white part of my eyes but that disappeared after four weeks. On the same day of surgery I was overjoyed to find that I could see individual leaves and petals with no spectacles. I had 90% vision back that same day and 100% vision by the next day.

It was wonderful to be able to see the alarm clock in the middle of the night, ( I used to sleep with my cell phone close by for this purpose). Recognizing people who waved to me and seeing the individual mosaic tiles in the shower or on the pool floor was unbelievable. People who have normal vision take these things for granted, but for someone who has worn glasses for 20 years it was a whole new beautiful world out there.

Admittedly, I had a small hiccup during my visual recovery. After two weeks, I noticed that my right eye was not seeing as well as my left eye. It was particularly noticeable while driving at night otherwise it did not bother me at all. My right eye had become extremely dry post operatively. The vision in this eye fluctuated a lot. It would start off clear in the morning and get a bit fuzzy by the afternoon. Dr Nortje was more bothered by it than I was and did everything he could to combat the dryness. I used lots of lubricating drops during the day and inserted teargel at night. I also took dry eye capsules to improve the quality of my tear film. He inserted plugs into my tear duct so that my tears  would not drain away and would stay in my eye. Two months later we were both relieved to find that I woke up one morning to perfect vision.

Of course when I am about 40 years old I will probably need some reading glasses which would happen regardless of having Lasik surgery. In the meantime I can enjoy ten years of spectacle free life and then with reading spectacles I will only be dependent on them 10-20% of the day as opposed to 100% of the time as before. The improvement in quality of life is definitely worth it.

I sometimes still reach for my spectacles after a shower or try to adjust them on my face. It’s like missing an old friend but it’s probably the only friend I don’t mind saying good bye to.

2010 – Its been five years since I had lasik and I am still enjoying it. My vision is still good and there has not been a need for spectacles or an enhancement yet.